With 119 miles of open road linking the incredible cities of Oklahoma City and Tulsa along Route 66—the ultimate weekend road trip is waiting just outside your front door. For years, Route 66 has been a historic backdrop that showcases the industrial progress our country has gone through over the years and has also been a pop culture phenomenon making a number of appearances in written works, films and songs. Right about now, you are probably singing the infamous Nat King Coles, Get Your Kicks on Route 66. With countless destinations to stop at along the way—the team at Homes by Taber wanted to fill you in on all of the must-see attractions. Pack your bags, fill up the car, and explore the state like you may have never done before. 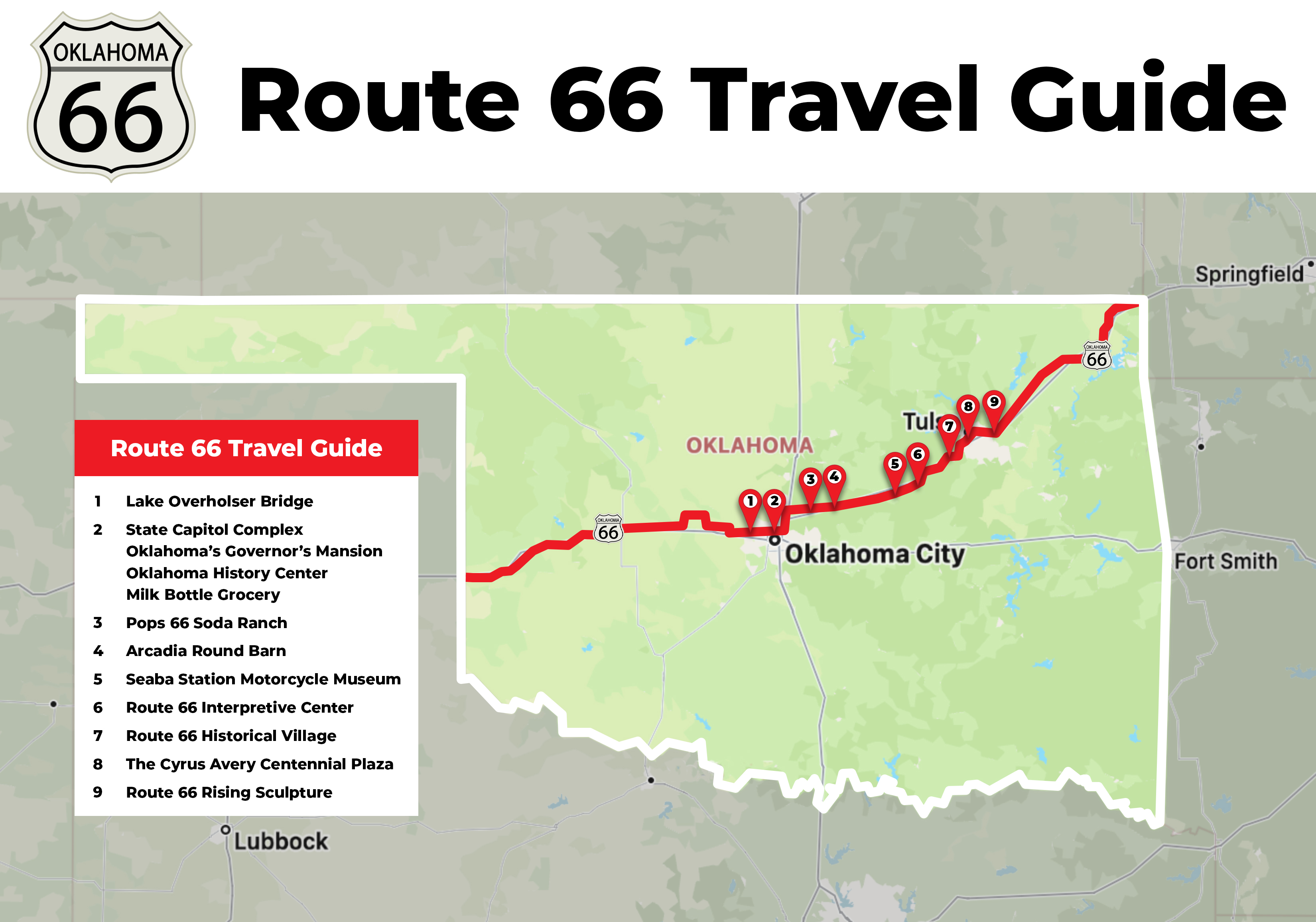 Starting off strong in Oklahoma City

At Homes by Taber, we’ve always had a special place in our hearts for the stunning area that is Oklahoma City, so we admit that we could be a bit biased when we say that some of the best stops along Route 66 can be found without ever leaving the city. When you make it a priority to stop at any one of these locations, though, we can assure you that you will instantly fall in love with the charming atmosphere that can be easily found.

Along the western edge of OKC lies the Lake Overholser Bridge—a pivotal landmark along Route 66 as it was one of the first main bridges to be built across the state of Oklahoma when roadways began making their way into everyday life. Along with the historical significance of the landmark, it’s also an incredibly beautiful outlook for individuals to park the car for a minute, stretch their legs, look out along the expanse of the pristine lake and appreciate the simple beauty the area has to offer.

Moving further along the route into the city of OKC itself, you’ll also want to try and stop by the State Capitol Complex to see the stunning architecture that the building showcases, the Oklahoma Governor's Mansion and the Oklahoma History Center where you can learn more about the history of OKC itself as well as some interesting facts about Route 66 before you continue your journey.

Before you leave the city, there’s a few additional stops along the way that will undoubtedly make the ideal backdrop for your road trip photo album. Originally constructed in 1930, the Milk Bottle Grocery building added the giant milk bottle to the top of the structure in the 1940s. By doing so, the ultimate photo-op on Route 66 came into existence.

While it might be hard to leave Oklahoma City with so much more left to see, the rest of your journey along Route 66 isn’t something you’ll want to miss out on either. Soon after you leave the state capitol, you’ll come across the city of Arcadia where you must make it a priority to stop at Pops 66 Soda Ranch. Take in the impressive 66 foot soda structure, enjoy an incredible meal at the full-service restaurant and stock up on as many bottled sodas as you can carry to get you through the rest of your day.

Before you leave Arcadia, though, don’t forget to make a quick stop at the Arcadia Round Barn. This beautiful location along the route has a charming gift shop filled with t-shirts, magnets, coffee mugs and so much more for you to explore. Once you’re done browsing, make your way up to the top of the building where you can marvel at the basket-woven ceiling in the main event room before heading back to your vehicle.

Next up, you’ll want to ensure that one of the stops you make is at the Seaba Station Motorcycle Museum in Warwick where you can stroll through a number of motorcycles dating all the way back to 1908 and take in how much has changed throughout the years when comparing the antique models to the current motorcycle designs of today.

While the historic highway is one you have surely heard much about—it seems as if every time you stop by another landmark, there is so much more you will learn about how it came to be. That’s why, when you pass through Chandler, OK—you’ll definitely want to make it a priority to stop and walk through the Route 66 Interpretive Center for an even more in-depth look into the historic highway that stretches 2,400 miles from Santa Monica, CA to Chicago, IL.

As you get further along the historic route, you’ll soon see the outline of the city of Tulsa—and as the ending point of your weekend road trip, there are a few top spots you’ll want to make sure you visit before your time on the road is up.

First, you’ll want to be sure to make a trip to the Route 66 Historical Village a priority on your list as the open area is the perfect place to take a deeper dive into the history of Tulsa’s involvement in the oil, refining and transportation industries.

If there is only one spot in Tulsa you can get to, though, before the day draws to a close, there is one spot in particular to set your sights on—The Cyrus Avery Centennial Plaza, located on the east entrance of the historic Route 66 bridge near downtown Tulsa, is the place to be. This particular Route 66 spot was named after Cyrus Avery who could be better known as “The Father of Route 66” as he was the first person to come up with the idea of Route 66, or as he called it—the Main Street of America.

When you get to the plaza, the scene depicted on the sculpture by artist Robert Summers is of the Avery family riding west in a Motel T Ford and coming face-to-face with a horse-drawn carriage heading in the opposite direction—marking the significance of a changing of the times as the state was ushered into the future of transportation.

Also as long as you’re already in The Cyrus Avery Centennial Plaza, be sure to find the Route 66 Rising sculpture that was dedicated just a few years ago for a final picture to add to your road trip memory album.

Find your dream home in the perfect location

At Homes by Taber, we make it our priority to create proudly-overbuilt homes and communities throughout the incredible neighborhoods that surround Oklahoma City and Tulsa—and with Route 66 making its way through the area, it’s no surprise that our homeowners are completely in love with the neighborhoods they choose to settle down in. If you’re interested in learning more about any of our stunning communities—give us a call at (405) 984-1185 in OKC and (918) 393-4149 in Tulsa or fill out our online form today.