A start-up pharmaceutical manufacturer with a reported potential to employ thousands is set to anchor a $240 million mixed-use development being built next year at the gateway to Oklahoma City’s innovation district.

Wheeler Bio, founded by Oklahoma City investor Christian Kanady and scientist Dr. Jesse McCool, is set to start with up to 100 scientists working on three floors of Kanady’s Ziggurat building at 120 Robert S. Kerr Ave. The company is set to expand into up to half of a 400,000-square-foot manufacturing and office complex at NE 8 and Stiles Circle.

Construction is set to start at the Ziggurat building this summer; work will begin on the larger development at NE 8 and Stiles Circle in February. And while developers promise what is shown in their renderings is what they will deliver, timing of an innovation hall is in question. 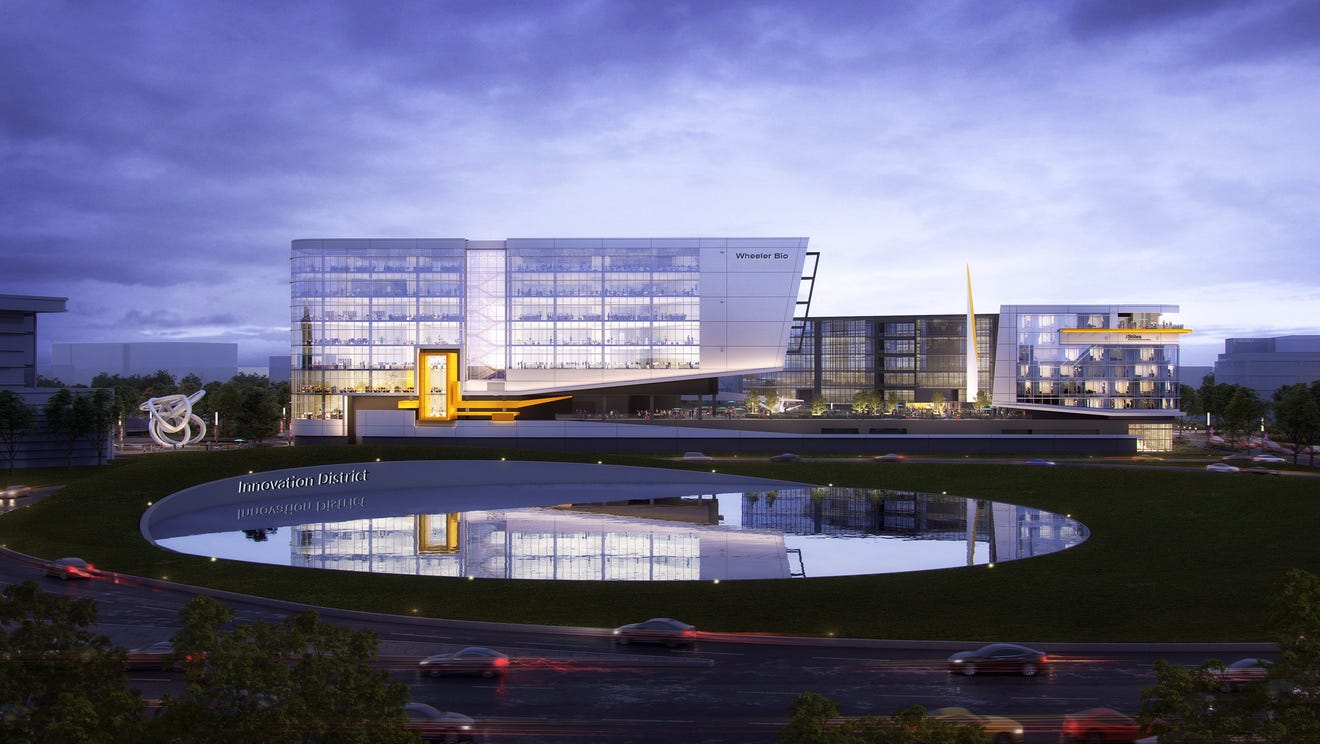 “We believe that Wheeler Bio in and of itself could represent a billion-dollar business that employs thousands of Oklahomans if done correctly,” Kanady said. “It’s pretty intriguing that the University of Oklahoma already has a pretty substantial chemical engineering program that could automatically feed into Wheeler Bio as its workforce.”

Oklahoma City has spent the half century transforming an area initially anchored by the University of Oklahoma College of Medicine into a 321-acre Oklahoma Health Center campus that is home to about two dozen medical, research and bio-tech organizations. A series of studies suggested merging the Oklahoma Health Center and nearby Automobile Alley into an “innovation district.”

Kanady, who last year invested in the launching of Prairie Surf Studios at the former Cox Convention Center, got his start in the energy industry working at Chesapeake Energy and then founding his own company, Echo Energy.

Oklahoma City’s future, he said, must go beyond the energy industry that helped make the city what it is today.

The Innovation District is already home to one pharmaceutical manufacturing plant. Cytovance Biologics was founded by Dr. William Canfield 15 years ago at what is now the OU Research Park at NE 8 and Lincoln. The company employs about 350 in three buildings at the research park and two others nearby and is a contract manufacturer serving large clients across the world. 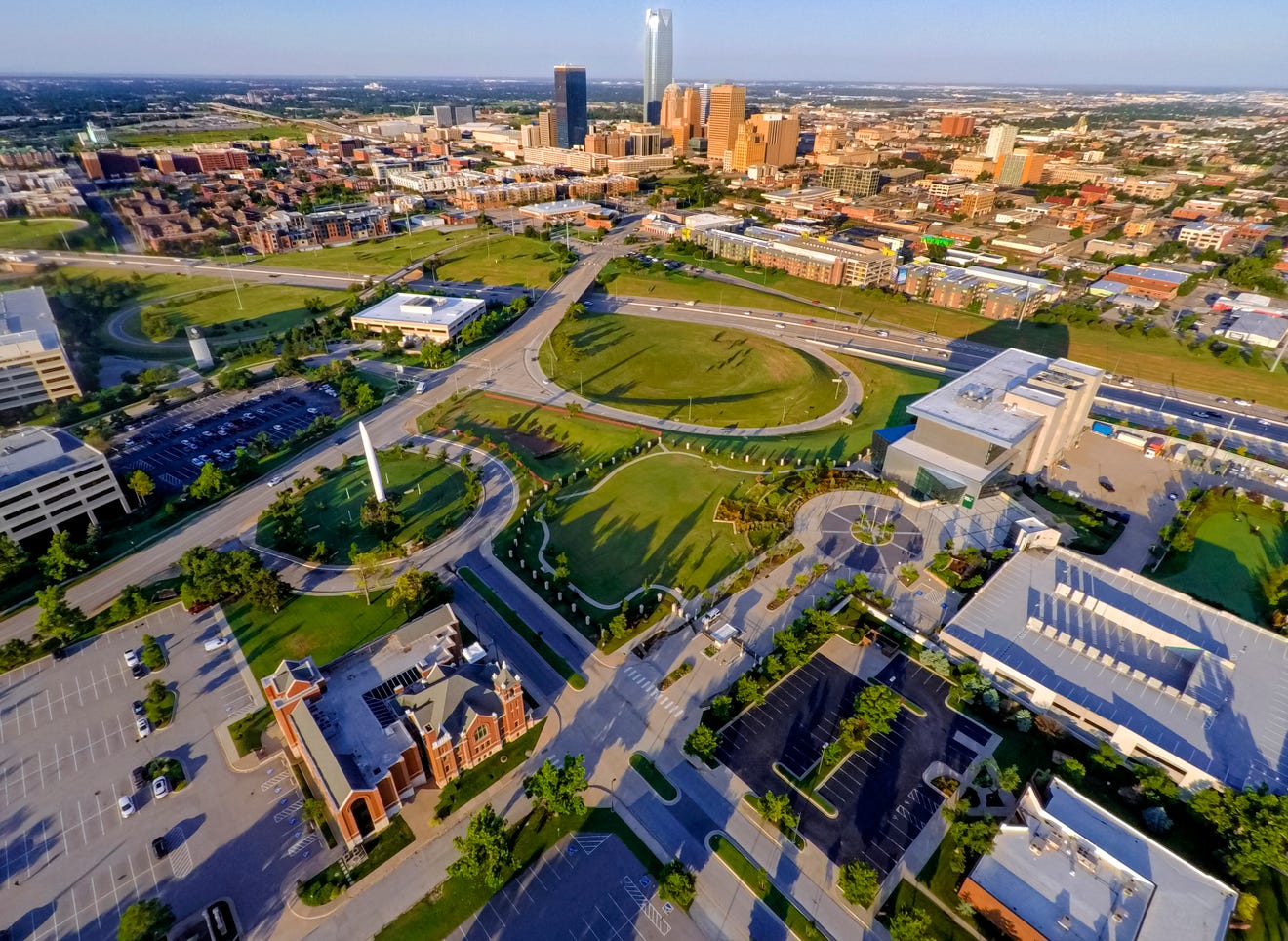 Wheeler Bio is being promoted as a way to keep building the bio-tech industry by serving emerging biopharma companies that require flexible partnerships over rigid, transactional contracts.

McCool moved from Boston to Oklahoma City in 2013 when he was hired by Cytovance Biologics to oversee growth and development. He was promoted from chief technology officer to CEO before leaving to start Wheeler Bio.

Cytovance Biologics grew into an international service provider during McCool’s time with the company. McCool, however, felt like Oklahoma City still had a gap to fill in keeping drug development in the innovation district.

“They are more focused on commercial manufacturing,” McCool said. “And my heart is in the small research side and focusing on the transition between drug discovery and development.” 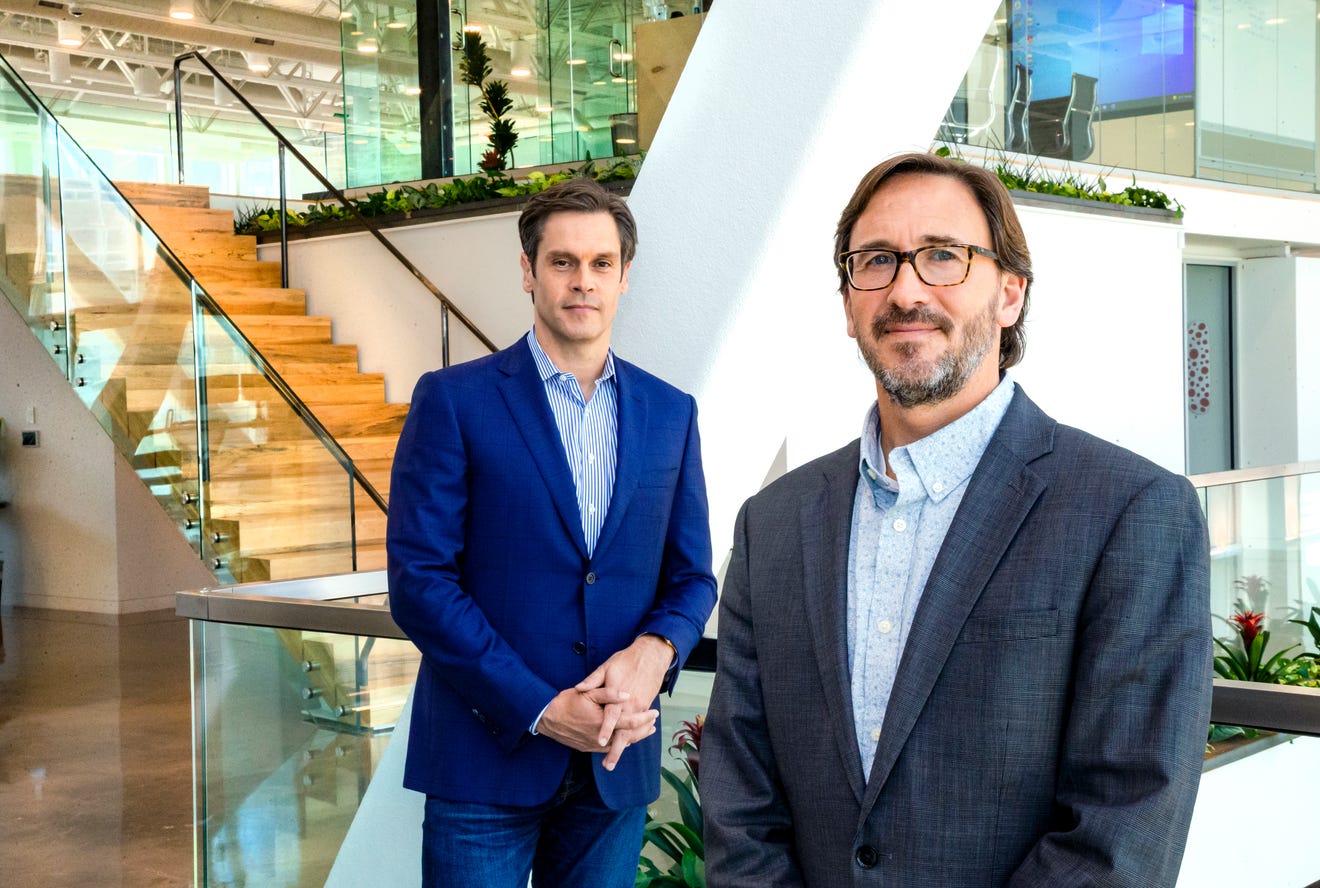 Kanady and McCool met while the investor was looking to fund efforts to improve COVID-19 testing and find ways to create safer spaces to reduce risk of infection.

The result of that effort, Wheeler Bio, started work earlier this year through a partnership with Waltham, Mass.-based Alloy Therapeutics. Alloy was launched in 2017 with the vision of providing affordable, non-exclusive access to scientists in academia, small and medium bio-tech and large biopharma.

“Our idea is to design a new type of bio-manufacturing service provider, one that is laser focused on emerging biopharmas, which are driving the industry,” McCool said. “They are the small companies focused on R&D. They don’t have the money to go out and invest in manufacturing of their drug. There is a lot of out-sourcing in manufacturing that goes on and there are some shortages of capacity and high-quality services.”

McCool and Kanady also say they see a shift in drug manufacturing to return to the United States following challenges encountered with the COVID-19 pandemic and manufacturing located in adversarial countries like China (Cytovance Biologics was purchased by a Chinese company in 2015).

“There will be more manufacturing coming back to the United States as a matter of national security,” McCool said. “These are topics being discussed and there are a lot of federal dollars pointed at meeting some of these objectives and reshoring manufacturing. COVID did show everyone the sort of bottlenecks that exist due to global production.” 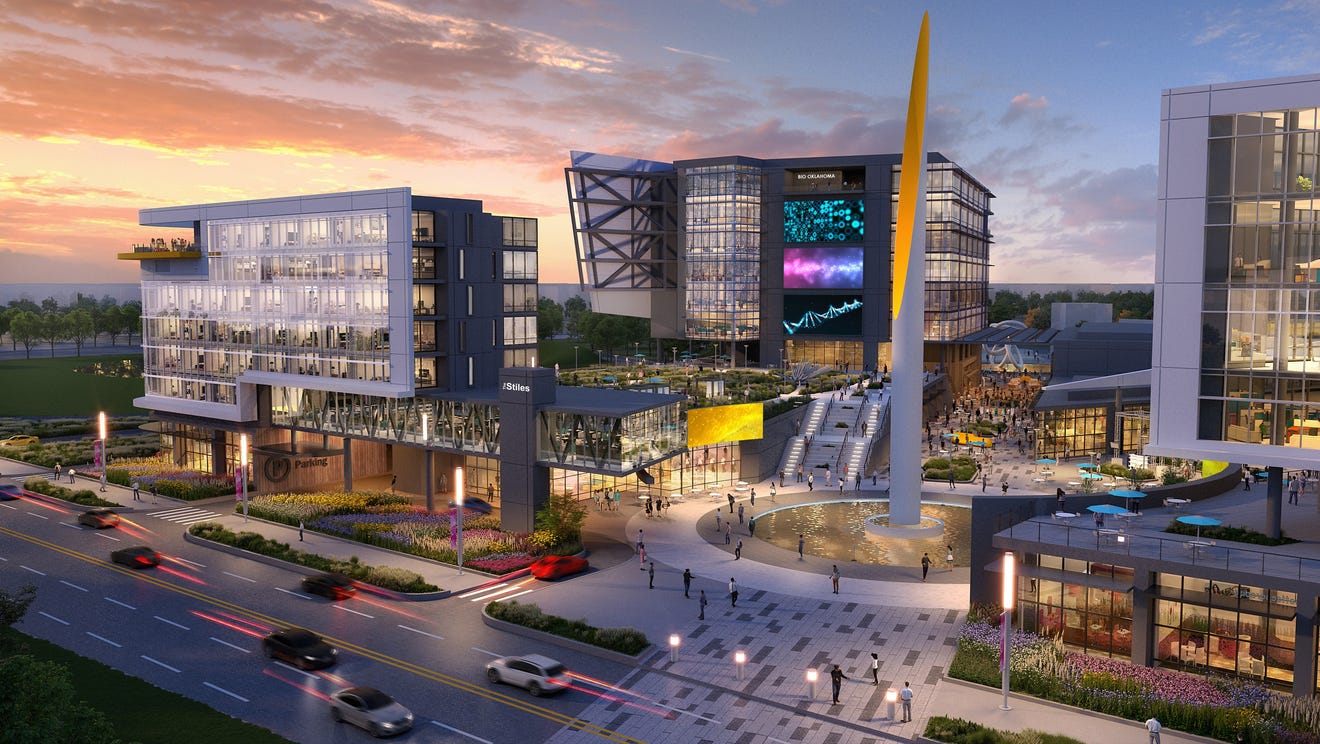 Wheeler Bio is part of a growing vision for innovation district

The unnamed development that will be home to Wheeler Bio started with a much smaller ambition by developer Mark Beffort to build a single 200,000-square-foot building that would have shared an existing garage with OSU Discovery (formerly home to the Baker Hughes Energy Innovation Center).

“It was originally designed for the Oklahoma Advanced Manufacturing Center,” Beffort said. “As we got into the project, we wanted to expand the scope from manufacturing for aerospace and a new type of 3d printing to also the bio-medical field. And we were not able to accomplish that on that smaller site.”

Project architect Ryan Dawson, principal at FSB, was tasked by Beffort and co-developer Richard Tanenbaum to design a mixed-use innovation campus that would be located at the innovation district gateway envisioned in a master plan developed by the Brookings Institute and global planning firm Perkins & Will.

The plan called for development far different from the institutional single user anchors in the Oklahoma Health Center. The future home for Wheeler Bio will include offices and manufacturing space for other tenants, a 100-room “Stiles Hotel,” restaurants, retail and lit-up plazas.

“Anytime you have a single-program element in isolation, it has minimal levels of activation,” Dawson said. “The goal with mixed use is to create a diverse experience for users and visitors. With the hotel and offices and retail and all the components, it extends the hours of activation and creates a vibrant experience.”

The location of the development also required a design to incorporate Stiles Park – the city’s oldest – and the 100-foot-high Beacon of Hope that sines a light into the air from the circular park. Plans call for removing the roads that surround Stiles Park and incorporating it into a pedestrian plaza that will connect the first phase manufacturing, offices and hotel with a second phase office building set to start construction as the first phase is completed. 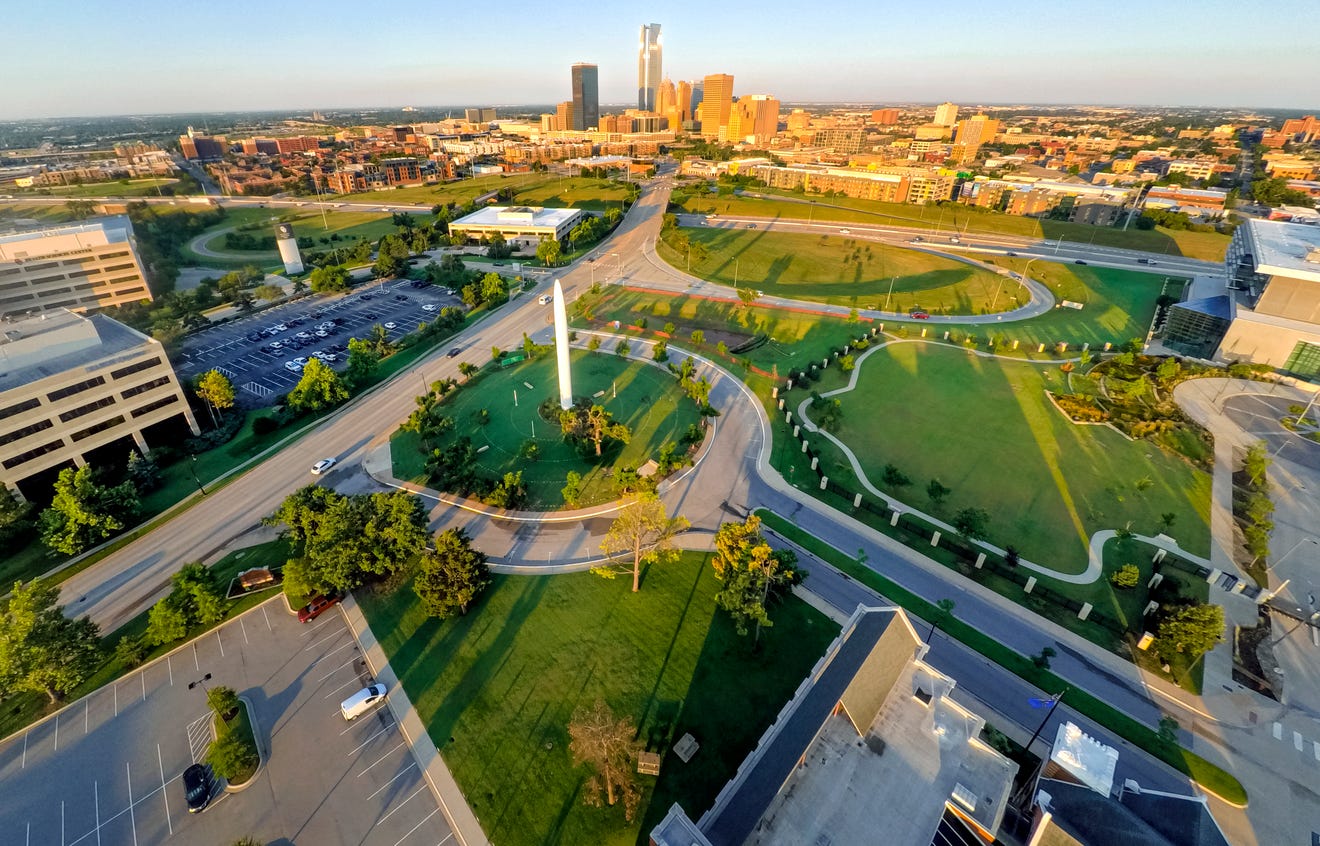 The proposed innovation hall is designed to be built atop underground parking that will serve the hall and the rest of the development. That parking, donated land, utilities and other considerations are looked at as being part of a match for the MAPS 4 funding.

“We want to make sure this development is the best it can be,” Beffort said. “And as a world class facility it should not be inhibited by a parking structure. So, we’re designing three levels below grade.”

If the hall is not built on the same schedule of the adjoining development, Beffort estimates it will cost another $1.5 million to put a lid on the parking compared to building the hall atop the parking.

“They put MAPS projects in a certain order,” Beffort said. “We're hoping the innovation hall will move up in that order because having it as a part of our project, up front with us, saves a significant amount of dollars from an infrastructure standpoint.”

Mayor David Holt said he would keep an open mind to the innovation hall scheduling but added his vote is one of nine in addition to input from city staff and a citizens’ advisory board.

“One of the strengths of MAPS is we have a lot of cooks in the kitchen,” Holt said. “It’s important the citizens’ advisory board, MAPS staff and council be a part of anything that requires judgment and sensitivity.”

Design work continues and Dawson said construction documents are being developed and the development will reflect what is shown in renderings.

Boren sees the innovation hall as key to not just the development but continued creation of a true innovation district.

“It's a front door, the public house of innovation and it’s at a central location for the district,” Boren said. “People will know where to plug in and where to go for events and gatherings and where they can exchange ideas and collaborate. It will be heavily programed with special events and subject oriented programming. It will be a central hub for the innovation eco-system across Oklahoma City.” Building and Moving: Life During and After the Pandemic